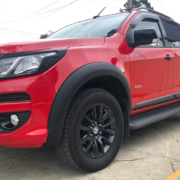 How you can help to protect your ride’s paintwork

Finding it is hard these days to give enough time to maintain your car. Cleaning the car may feel like a chore, or for some of us, we simply do not have the space available to clean it ourselves, hence why you find a car wash place on almost every corner these days!

A lot of the reasons why we need to wash the car are unrelated to the day-to-day use (dirt), rather are caused by environment effects out of our control.

Leaving bird droppings on the body of the car may cause damage that ranges from simple paint discolouration to the worst case of the paint film layer dissolving completely. The bird droppings composition and quantity hold a large amount of acid caused by the different variety of food products birds consume.

Leaving the bird droppings on the paintwork for extended periods is strongly not recommended, especially when exposed to high/hot temperatures. Paint may appear bubbly, with swell or etch like characteristics. Extended periods of exposure may require the panel to be completely resprayed.

As soon as you notice bird droppings on paintwork, wash immediately to prevent any further paintwork damage. Roar Wash & Gloss is an excellent product to assist in the removal of contaminants.

Stone chips can be almost impossible to avoid, especially common to find at the front end of cars. The tiny ‘chip’ impact holes in the surface of the paint cause paint film layers damage. The simple solution to take your eye off the stone chip would be to brush touch it. However, these days with the different degree of paint types (solid, metallic or three-layer pearls) a simple brush touch may not actually make it look any better or ‘hide’ the stone chip. It is also important to be aware of the use of water-borne paint,  the brush touching will apply and dry differently in comparison to proper paint and bake in a spray booth. If the panel has suffered widespread stone chips it may be better to be repaired or replace the panel before repainting.

The chemical aggression from tree sap or blossom resin has the ability to etch deep in the paintwork. Tree sap appears in thread or droplet like deposits. As soon as you notice tree sap it is important to remove it immediately to help prevent long term damage. Try first to remove the tree sap with soapy water with a Roar Microfibre Car Wash Sponge. If further removal of the tree sap is needed, polishing products can assist. In a worse case, it may be necessary to re-spray the panel.

Ever noticed those faint yellow marks on your car? Those are little bug secretions marks. Bug marks may cause the top paint film layer gloss to discolour. Like all environment effects mentioned so far, it is important to remove immediately. Wash with soapy water. If that does not fully remove the bug mark, the use of polish should do the job. If all else fails the last resort would be to re-spray the panel. This is the absolute last resort. Bug marks in comparison to other environmental effects are easier to remove from the body (paintwork) of the car (not so many plastic grills and trims though!).

Industrial fallout is probably my most dreaded and hated environmental effect. Why? The industrial fallout in particles of rust that sit on the top film layer of paint. It is especially noticeable in the paint of light colours. The fallout has the ability, if and when left on for extended periods to cause corrosion on the paint film. Using a soapy Roar Deep Wash Clay Mitt clay to remove the fallout is a great recommendation. The clay cloth helps pick up the tiny particles that are sitting on the panel surface. Depending on how long the fallout has been sitting on the car, it may require additional buffing and polishing to help remove the fallout.

For those especially who live close to the beach may notice more often than others the effect salt has on paintwork. This environmental effect has little prevention in relation to polishing, rather the panels affected will require re-spray to properly rectify the corrosion. Prevention of corrosion recurring is to strip the panel back to bare metal to be able to remove all the corrosion. In some cases, the panel might require replacing if the rust caused by the corrosion is serious.

Going to the local car was in some cases the most ideal situation or it might be the only option you have to clean your car. Car wash places present a range of potential paint safety concerns. Beyond the uniform of car wash employees leaning against the car, the quality of the products used is vital. The products should be silicone-free (silicone is not good for your car – both interior and exterior!), all clothes used in the process must be washed, clean and dry regularly to clean off any particles that could cause scratching. Roar’s Absorption Cloth (for dying off) is excellent as the cloth is suitable for paint, chrome, glass and trims to assist in the prevention of scratches.

A good idea is to wax the paintwork as it helps provide sealing protection – and it feels smooth!

Over time, especially with particular colours you may start to notice a colour variation in some panels due to the colour fading. UV radiation and weathering are major contributors to colour fading or change. As like corrosion, colour fade or change has little prevention in relation to a simple polish, rather the panels affected will require re-spray to properly rectify the colour difference. Not ready to respray your whole car? Roar’s Wash & Gloss may help in providing some additional gloss to the paintwork. 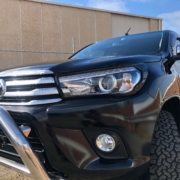 Here in Australia, the Toyota Hilux has been a big hit for many years. It is consistently the best-selling commercial vehicle on the market and outselling any other ute or van. In reality, it outsells small hatchbacks and family SUVs in Australia. A hardworking tradesman can’t argue about the thousands who purchase a HiLux. If you’re driving through the countryside or stuck in city traffic, you’re bound to come across a Toyota Hilux. This car has long been popular among Australian car owners from all walks of life for many reasons, the majority of which comes down from its incredible functionality.

If you’re looking for a new work vehicle or a car that looks professional, you’re probably considering the Hilux rather than other choices. At Autoflare, we believe in the incredible capabilities of the various Hilux models, and we’re here to help you understand why Australians adore this vehicle! Here are the top ten reasons why the Australian tradies love Toyota HiLux.

Toyota products are always reliable, and the Hilux is one of their best-selling versions. Toyota markets the Hilux as ‘unbreakable’ in Australia for a reason. Hilux has not been recalled in Australia since 2010, and it remains a common option in rural areas where reliability is highly valued.

While it lacks some of the fancier features offered by competitors, the Hilux provides tradies with the features that are essential to them. Bluetooth is standard on all models, including the base cab chassis. All models also include an MP3/USB compatible stereo, easy-clean vinyl seats for the base model that don’t matter if they get dirty.

The HiLux is built on a sturdy ladder frame and is as tough as they come. It’s branded as “unbreakable” in Australia and other parts of the world. Toyota would face if its utes began breaking. Towing power ranges from 2250kg to 2500kg while braking. When compared to competitors, the payload in the back is higher than average. Depending on the cabin and tray layout, the HiLux can hold anything from 860kg to 1405kg in the tray. Underneath, 4×4 models have a range of heavy-duty safety plates that cover the main components.

All HiLux models are equipped with at least two airbags and have a five-star ANCAP safety rating. Top-spec models have up to eight airbags, seatbelt pretensioners, and a reversing camera.

The HiLux cabin is one of the most user-friendly in the industry on the inside. Although the touch-screen interface on some models has tiny buttons that can be difficult to push, controls are usually easy to find and work. The dash is set back away from the driver, with plenty of cubby holes and storage areas for receipts, coffee, and other products.

There is no other vehicle on the market with the same prestige as the HiLux. Top Gear invented the term “invincible” for the HiLux and even put it through some insane tests and try to kill it. Finally, it restarted and drove forwards. Toyota is now known for producing high-quality, dependable goods. One of its strong points is its ute segment. For nearly 50 years, it has been producing utes.

Since the HiLux is a mass-produced vehicle, components are readily available and reasonably priced. If you shop around at Autoflare, you may also find aftermarket parts and accessories, and you might be able to find even better offers on some products.

There are currently over 22 variants on the market in Australia, implying that there is a kit suitable for any duty. The collection is available in an aluminum tray-back shape for the truly heavy-duty tradesman, as well as a sporty body-back model for a trendy look.

The HiLux is one of the best drives in the light commercial vehicle industry, whether you’re out on a dusty trail or navigating city traffic. Unlike some other utes that have unnecessary lock-to-lock turns, most models feel very sedan-like, with a relaxed driving position, good handling, and great steering. The independent front suspension provides cabin comfort, while a live axle configuration at the rear guarantees a strong cradle for heavy loads.

If you’re a tradesman, a weekend warrior, or a good old-fashioned Australian adventurer, there’s a Hilux on the market for you. At Autoflare, we have access to Hiluxes of all eras and styles, giving you the best chance of having the right car parts for your vehicle. For more details, go to Autoflare’s official website https://www.autoflare.com.au/ where you can buy the right car parts and accessories at the best price.

Do you own a Toyota Hilux and need to get it serviced?

The tough Toyota Hilux has the potential to be a front-runner in the pick-up class due to its constant evolution. It has been on the market for more than 50 years, and its reputation for go-anywhere dependability has earned it admirers and fans all over the world. Since 1968, more than 18 million examples have been made but the most recent version has been upgraded and improved to make it more appealing than ever. The new edition, which will be available for the 2021 model year, offers even more comfort and technology while still qualifying for the tax cuts available to drivers of company-owned “private vehicles” with a load capacity of one tonne.

When you decide to buy a Toyota Hilux and you take on the burden of maintaining it. No need to worry! Autoflare will provide high-quality service and repair advice to assist you in taking care of your Toyota Hilux. We are proud to have our well-established parent company Carlingford Prestige Smash Repairs, a highly reputable collision repairer with long-running relationships in the entire automotive sector with over 20 years of experience in the industry. AutoFlare is a custom supplier of accessory parts such as wheel arch flares, grilles, headlights, taillights, body molds, headlight trims, tail light trims, bonnets, and so on. So, if you want your vehicle to be treated so well. Tell us in the comments or email us at info@autoflare.com.au.